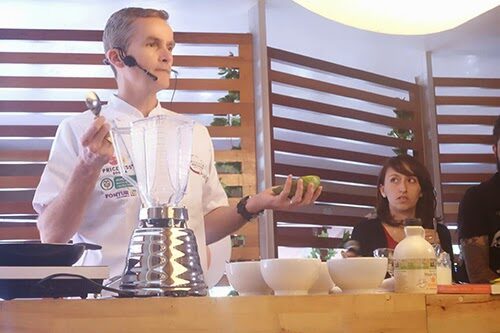 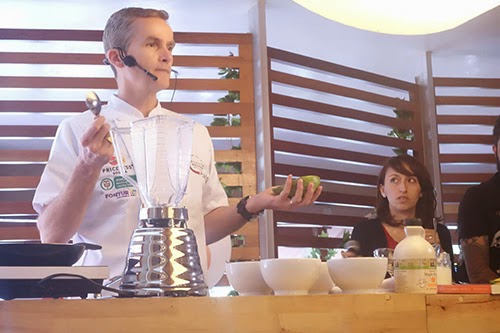 I was chosen as one of the special guest chefs at the Food & Wine festival in Bogota, Colombia (August 27-31). The festival is held all over the world and has been held in Bogota the last 3 years. There were 40 International chefs to participate in this prestigious culinary festival, but I was the only Australian chef and one of only two chefs presenting a vegan dish over the 4 days.
On Saturday, the main day of the festival, over 200 of Bogota’s luminaries came out to have breakfast made by Crepes and Waffles founder, Beatriz Fernandez, Dr-Cow Pablo Castro and then myself.
The event kicked off with Beatriz Fernandez welcoming the attendees and sharing her philosophy on intentional cooking and the importance of preparing meals with love. She pointed to me and told the audience how happy she was to have him was looking forward to hearing about food yoga. Next Beatriz demonstrated one of her restaurant’s signature wraps. Pablo Castro “Dr Cow” followed her presentation with a demonstrator  on how to make a raw vegan granola and sesame milk. Then my fiancé Juliana Castañeda and I took the stage and while Juliana translated, I wowed the crowd with a raw vegan chocolate mousse and toasted granola, while explaining the essence of what Food Yoga is: connecting with food in such a way as to nourish our body, mind and soul. The audience was immensely pleased with his talk and many said it was the highlight of the event.

A warrior of light and a deliverer of love

Spiritual Life Begins with the Tongue