The Teachings of Saint Francis are alive and well in Colombia! 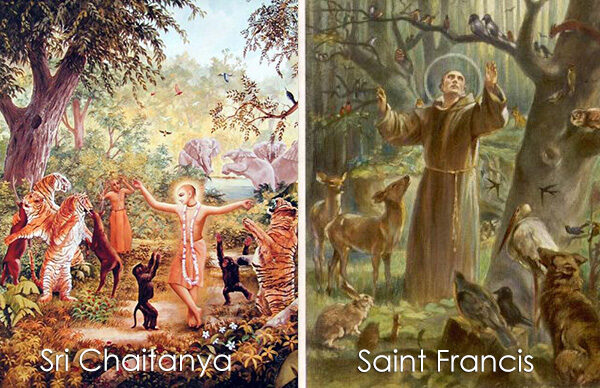 There are basically two distinct schools of Christian thought: The Aristotelian-Thomistic school and the Augustinian-Franciscan school.

The Aristotelian-Thomistic school teaches that animals are here for our pleasure—they have no independent purpose.  We can eat them; torture them in laboratories – whatever we feel is necessary for our survival. Most modern Christians embrace this form of their religion. And sadly so do most people these days. We live in a very cruel and uncaring world, where animals are routinely slaughtered in the millions every day, with an estimated 150 BILLION being killed annually.

The Augustinian-Franciscan school, however, teaches that all living beings are brothers and sisters under God’s fatherhood. This is similar to the teaching of the great saint Sri Chaitanya, revered as an incarnation of Krishna by the Vaisnava tradition. Like Saint Francis before him, he also spoke to animals and even danced with tigers in the Jarikanda forest of India.
St. Francis felt a deep kinship with all of creation, addressing it as a “brother” or “sister,” firmly believing that everything came from the same creative Source. While Sri Chaitanya taught that all living beings are spiritually equal, but due to karma they appeared in one type of body or another for the time being. “All souls were evolving through different species,” he said.
Saint Francis’ great compassion and respect for the animal world also manifest in his expression of hospitality during Christmas (1223):

And on Christmas Eve, out of reverence for the Son of God, whom on that night the Virgin Mary placed in a manger between the ox and the ass, anyone having an ox or an ass is to feed it a generous portion of choice fodder.  And, on Christmas Day, the rich are to give the poor the finest food in abundance.

Indeed, St. Francis’ respect for creation appeared to have no boundaries. It is said that he once removed worms from a busy road and placed them to the side so they would not be crushed under human traffic. When mice ran over his table as he took his meals or over his body while he slept, he regarded the disturbance as a “diabolical temptation” which he met with patience and restraint, indicating his compassion towards other living creatures.
The Catholic Encyclopedia comments on his compassion:

St. Francis’ gift of sympathy seems to have been wider even than St. Paul’s, for we find no evidence in the great Apostle of a love for nature or for animals … Francis’ love of creatures was not simply the offspring of a soft sentimental disposition.  It arose from that deep and abiding sense of the presence of God.  To him all are from one Father and all are real kin … hence, his deep sense of personal responsibility towards fellow creatures:  the loving friend of all God’s creatures.

According to St. Francis, a lack of compassion for animals leads to a lack of mercy towards humans. “If you have men who will exclude any of God’s creatures from the shelter of compassion and pity, you will have men who will deal likewise with their fellow men,” he said. Similarly, the Russian writer and philosopher, Leo Tolstoy believed that by killing animals, “a man suppresses in himself, unnecessarily, the highest spiritual capacity – that of sympathy and pity towards living creatures like himself – and by violating his own feelings becomes cruel.”

These wise words ring true in a modern world that kills 150 billions animals annually. It appears that a nonchalant attitude towards animals could indeed be the root cause of an indifference to the fact that nearly one billion humans go hungry every day. There is something fundamentally wrong here and yet most of humanity just goes on as if everything is fine and dandy with how we sustain our bodies.

The Reverend Basil Wrighton, who served as Chairman of the Catholic Study Circle for Animal Welfare in London, during the 1960s, called St. Francis “the greatest gentleman that Christianity has produced, in the strictest sense of the word.”  Reverend Wrighton himself was a remarkable figure, writing in favor of vegetarianism, against animal experimentation, decades before the contemporary movement for animal rights emerged. According to the Reverend Alvin Hart, an Episcopal priest in New York: “Many Georgian saints were distinguished by their love for animals.  St. John Zedazneli made friends with bears near his hermitage; St. Shio befriended a wolf; St. David of Garesja protected deer and birds from hunters, proclaiming, ‘He whom I believe in and worship looks after and feeds all these creatures, to whom He has given birth.’

Early Celtic saints, too, favored compassion for animals. Saints Wales, Cornwall and Brittany of Ireland in the 5th and 6th centuries AD went to great pains for their animal friends, healing them and praying for them as well.”

One of the many anomalies of so-called “civilized society” is the convenient justification of some people to eat certain socially-acceptable forms of meat while simultaneously working to protect animals. Otoman Zar-Adusht Ha’nish*,  said it this way: “It is strange to hear people talk of humanitarianism, who are members of societies for the prevention of cruelty to children and animals, and who claim to be God-loving men and women, but who, nevertheless, encourage by their patronage the killing of animals merely to gratify the cravings of appetite.”
A recent ad campaign by Mercy for Animals sheds light on the hypocrisy of the modern diet.

My question is: why discriminate? How is it acceptable in one country to eat a cow and sleep with a dog and in another country to worship a cow and eat a chicken and in another to eat a dog. None of this makes sense. We cry out for peace and yet allow the wholesale slaughter of our animal “brothers and sisters” to go on unchallenged. If you really want peace in the world, start avoiding violent foods like meat, fish, eggs and commercial dairy.

One project that has recently affiliated with Food for Life Global is trying to teach people by example that all animals deserve love and respect. Paramatma Animal Sanctuary located in the Andes Mountains just outside of Bogota, Colombia was founded by Juliana Castaneda and her friend Ekala das. The project founders were inspired by the teachings of Saint Francis from early childhood. The shelter is home to 34 abused and neglected animals, including one cow, one ox, one horse, 21 dogs, seven cats, 1 rooster, 1 lab rabbit, 1 quail and 1 lab rat. Juliana talks about some of the animals she has saved:

Seeing the good work of this project and the founder’s sincere efforts to teach a culture that has become defined by animal slaughter, Food for Life decided to help this project when an an unlucky turn of events led to them losing the farm. Food for Life Global sponsored a crowdfunding campaign to raise funds to build a new shelter for the animals and allow Juliana and Ekala to continue educating the South American public.

Paramatma is a Sanskrit word meaning “God in the heart.”Param: Supreme; Atma: Soul. So the main objective of our animal shelter is to teach the world that God is in the heart of all living beings.

“While Ekala (above left) takes care of all the needs of the sanctuary, feeding the animals, cleaning, fixing broken fences, caring for their health and medicine, etc, I spend all my time earning money to support the shelter. On the weekends, however, I am also helping with the manual labour of caring for these animals. It is incredibly hard work,” explains Juliana.

Animals depend on us to speak up for them; to show them our love and respect. They are innocent children and they are just as much a member of God’s family as we are.

Visit Juliana’s campaign page and donate even $1 dollar to her new shelter. “Surely you have $1 in your pocket,” says Juliana. “My animals don’t have pockets.”

*Otoman Zar-Adusht Ha’nish (1844–1936) was the founder of the religious health movement known as Mazdaznan, which is based on Zoroastrian and Christian ideas with special focus on breathing exercises, vegetarian diet and body culture.