World Food Day is a great idea, but what is the real solution to World Hunger? 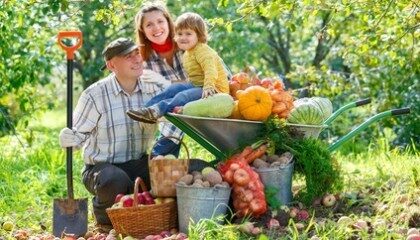 World Food Day is celebrated every year around the world on 16 October in honor of the date of the founding of the Food and Agriculture Organization of the United Nations in 1945. The day is celebrated widely by many other organisations concerned with food security, including the World Food Programme and the International Fund for Agricultural Development.

At the most recent United Nations General Assembly, it was declared that 2014 would be the “International Year of Family Farming” (IYFF). Therefore this year the theme for the internationally acclaimed event is: Family Farming: “Feeding the world, caring for the earth”

When I see the words, “Family Farming,” I immediately wonder how many people think of family farms as associated with raising cattle. The animal agriculture lobby groups have had so much influence on public perception over the last 50 years that it would not be surprising. However, a “family farm” is simply a farm owned and operated by a family and not some large corporation. Like other family businesses, ownership often passes to the next generation by inheritance. It is the most fundamental economic structure of much of human history and continues to be so in developing nations.

The goal of the 2014 IYFF is to reposition family farming at the centre of agricultural, environmental and social policies in the national agendas by identifying gaps and opportunities to promote a shift towards a more equal and balanced development. This is a major push to change food production policies with much of the economic support currently going to animal agriculture, and with devastating consequences, as pointed out in the 2006 UN report on the environmental impact of animal agriculture, that stated that  the rearing of cattle produces more greenhouse gases than driving cars. And yet, some 8 years later, this damning report hardly gets any press. However, maybe, just maybe, with this new push for family farming by the UN the public may start to see the big picture.

“Family Farming is the fulcrum on which our future food security pivots,” said Executive Director of the World Food Programme (WFP) Ertharin Cousin. She highlighted that in establishing a new and sustainable vision for family farms that enhances global food supplies and protects the earth’s resources, “we must address one universal problem: gender inequity.” With this statement Cousins highlighted the multitude of ways that unequal access to agricultural inputs (read: government subsidies) affects women, forcing them to “work harder and longer for less.”

Archbishop Luigi Travaglino, Pope Francis underlined the need to acknowledge the increasing role of the rural family and to develop its full potential. “This year dedicated to family farming has served to allow us to see that the rural family can respond to a lack of food without destroying the resources of creation. But we must be responsive to their needs,” he said.

One of the most important factors affecting national and global food supplies is the amount of money which governments pay out in subsidies to farmers. Most tax payers don’t know it, but currently this “payout” is heavily weighted towards animal agriculture, making the cost of meat artificially low. Yes, your tax money has been paying for farmers to use and abuse animals, making animal agriculture (factory farming) an affordable business model when in fact the real cost of producing meat would leave the livestock industry broke. This biased support of an industry that has caused more environmental damage to the planet than even all the Exxon oil spills in history, is largely due to their powerful lobbyist and immense financial power to influence not only public policy, but the public narrative of what constitutes a healthy diet.

The Meat Atlas is one of the most fascinating studies on the world’s agricultural industries ever to be released. It highlights just how much money is pumped into the animal agriculture sectors around the world, and how this is making meat prices drop lower than in a natural economy. Barbara Unmüßig, president of the Heinrich Böll Foundation, who created this report says that, “In many countries, consumers are fed up with being deluded by the agribusiness. Instead of using public money to subsidize factory farms – as in the United States and European Union, consumers want reasonable policies that promote ecologically, socially and ethically sound livestock production.
In the current situation, for the independent “family farmer” to regain any sort of practical economic independence, it would seem necessary that the entire food industry be restructured. Let’s hope that on this day, a shift really starts happening to move the spotlight away from an industry that continues to destroy the environment and control the message.

What the UN is not Considering

The United Nations FAO has done much to educate the public about world hunger and have offered a number of solutions through their Millennium Development Goals, this year specifically pointing out how gender inequity is a major contributor. However, what they do not consider, and quiet frankly are unable to because of the political nature of their organization, is that the real cause of world hunger is spiritual inequality.
We strongly believe that only until their is a major shift in consciousness and the world begins to see the spiritual equality of all living beings, including cows, pigs, and chickens, can their be a remote chance of actually solving world hunger. How so?
As we have pointed out numerous times, and which is supported even by the United Nations, world hunger is not due to a lack of food in the world, but rather inequitable distribution of the Earth’s resources. According to most reports, the earth has the capacity to feed double the current population if agricultural resources were used more efficiently. For example, did you know that animal farms use nearly 40 percent of the world’s total grain production. In the United States, up to 80 percent of grain production is fed to livestock? And yet this same livestock can only feed a fraction of humanity.

For every pound of red meat, poultry, eggs, and milk produced, farm fields lose about five pounds of irreplaceable top soil. The water necessary for meat breeding comes to about 190 gallons per animal per day, or ten times what a normal Indian family is supposed to use in one day, if it gets water at all. – Vandana Shiva, Stolen Harvest, (South End Press, 2000), pp. 70-71.

The impact of beef covers many issues today

The intensive farming of animals to feed the world has been the biggest mistake of the modern world, leading to the greatest misuse and abuse of land in history, with overgrazing leading to land degradation, top soil loss and water wastage. Large amounts of forests, including the Amazon have been totally lost to cattle grazing.

Greenpeace Brazil released a report at the World Social Forum in Belém showing that up to 80 percent of deforestation in the Amazon rainforest is due to an increase in raising cattle for human consumption. (Source)

[B]eef is terribly inefficient as a source of food. By the time a feedlot steer in the United States is ready for slaughter, it has consumed 2,700 pounds of grain and weighs approximately 1,050 pounds; 157 million metric tons of cereal and vegetable protein is used to produce 28 metric tons of animal protein. … [B]eef in the quantities that Americans consume it is unhealthy, being linked to cardiovascular disease, colon cancer, breast cancer, and osteoporosis. Yet Americans are among the highest meat consumers in the world and the highest consumers of beef. — Richard Robbins, Global Problems and the Culture of Capitalism, (Allyn and Bacon, 1999) p.221

But putting aside the horrors and insanity of raising of cattle for food for a moment, the fact is: the principle cause of world hunger is none of the above, but is in fact spiritual inequality that manifests as greed.

You see, if the human population equitably shared the resources of the earth, world hunger and a host of other social issues would cease to exist. So why aren’t we doing that?

The World of Names Keeps us Divided

A funny thing about the world we live in is the names we give things. Languages have a way of keeping us rather distant and disconnected if our brains are not able to assimilate the meaning of the sound. In an English speaking countries, we call something “bread” and yet in Russia this same thing is known as “hlep,” or in Armenia, bread is called “puri.” They are very different sound vibrations all trying to identify the same material thing. The same applies to what some people consider “food”. Whereas some people worship a cow, others see a cow as a whole lot of “hamburgers.” Similarly, while it is very common for Americans to spend billions on their “pet dogs” in China and other countries “dogs” are on the main course!

Another thing to keep in mind is when we label something we are essentially giving that thing a sense of permanence when in fact nothing is really permanent in this world, since the material elements which make up that thing are in a constant state of flux and breaking down. What we consider to be a “desk” today, was at one time a “tree” and which in the future could very well be turned into “coal” in a fire place. The same combination of material elements has taken on three very different appearances, each with its own unique labelling and yet despite the transient nature of this world we generally turn a blind eye and go about making permanent plans for ourself.

So what does this have to do with world hunger? Everything.

You see, once we grasp the fact that we are all sourced from the same energetic pool then the feeling will be a sense of energetic equality. We are all made up of the same material stuff combined differently to create the various material forms we see, feel and hear. Of course, we are much more than matter and the great spiritual teachers of the world have tried to alert us to this deeper truth — that we are essentially a “witness” or a “driver” within a material machine. When we go to this deeper understanding of life, it adds even more credibility to the notion of equality. We can now talk of not only energetic similarity but of true spiritual equality.

It is our mission at Food for Life Global to teach this simple truth of spiritual equality through the practical expression of sharing pure food. In doing that we hope that each and every person that receives a meal, along with each and every person that witnesses the selfless act of kindness, will have a real “aha” moment and will never see the world in the same way again and things like world hunger will become some remnant of a past ignorance.