Karma is a bull when there is an unfair fight 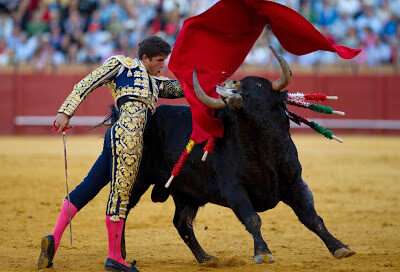 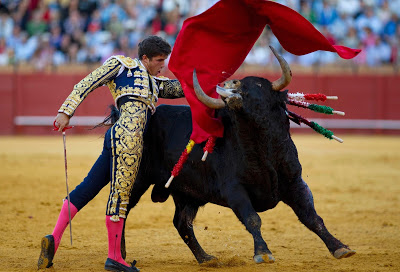 As a follow-up to my last blog article about fighting, there is one so-called “sport” that stands out amongst all others as the dumbest, most barbaric, ego-centric display of brutality — bullfighting.

This cruel spectacle of blood and gore continues to flourish in Spain, Colombia and other countries. It is presented as a contest of conviction and skill between a brave matador and a mad and ferocious beast. The matador, dressed in a traditional costume of brilliant colours tries to toy with and evade the charging bull. For many this fight is an ancient ritual of showing the superiority of man over beast, but once they have witnessed the brutality with their own eyes, they typically never come back for a second show.

Like most bovine, bulls are not naturally aggressive, but must be provoked to illicit an aggressive response. What most people are unaware of is the cruel treatment the bulls undergo prior to their entrance into the arena.

The http://www.stopbullfighting.org.uk/ website explains: “What spectators see is not a normal, healthy bull, but a weakened, half-blinded and mentally destroyed version, whose chances of harming his tormentors is virtually nil.”

What Exactly Happens to the Bull Prior to the Fight?

“The bull has wet newspapers stuffed into his ears; vaseline is rubbed into his eyes to blur his vision; cotton is stuffed up his nostrils to cut off his respiration and a needle is stuck into his genitals. Also, a strong caustic solution is rubbed onto his legs which throws him off balance. This also keeps him from lying down on the ground. In addition to this, drugs are administered to pep him up or slow him down, and strong laxatives are added to his feed to further incapacitate him. He is kept in a dark box for a couple of days before he faces the ring: the purpose of this is to disorientate him. When he is let out of the box, he runs desperately towards the light at the end of the tunnel. He thinks that at last his suffering is over and he is being set free — instead, he runs into the bullring to face his killers and a jeering mob.” (source)


Our Desire to Lord it Over Others

The urge to lord it over the material energy, which includes other living beings, is the root cause of our bondage in this material world. At some point in time, we all desired to be masters, and so, as Vedic scholar, Srila Prabhupada explains in his commentary on Srimad-Bhagavatam verse 3.26.5

“…the material energy was accepted by the Supreme Personality of Godhead in order that He might exhibit pastimes for the living entities who wanted to enjoy and lord it over the material energy. This world was created through the material energy of the Lord for the so-called enjoyment of such living entities. Why this material world was created for the sufferings of the conditioned souls is a very intricate question. There is a hint in the previous verse in the word lilaya, which means “for the pastimes of the Lord.” The Lord wants to rectify the enjoying temperament of the conditioned souls. It is stated in Bhagavad-gita that no one is the enjoyer but the Supreme Personality of Godhead. This material energy is created, therefore, for anyone who pretends to enjoy. An example can be cited here that there is no necessity for the government’s creation of a separate police department, but because it is a fact that some of the citizens will not accept the state laws, a department to deal with criminals is necessary. There is no necessity, but at the same time there is a necessity. Similarly, there was no necessity to create this material world for the sufferings of the conditioned souls, but at the same time there are certain living entities, known as nitya-baddha, who are eternally conditioned. We say that they have been conditioned from time immemorial because no one can trace out when the living entity, the part and parcel of the Supreme Lord, became rebellious against the supremacy of the Lord.”

What these idiotic matadors fail to understand is that for all their machismo in fighting off the charges of a weakened bull, they must ultimately suffer karmic reaction – or “bad karma,” and sometimes it ain’t pretty.

All karma is bad in the sense that it necessitates bondage to this material energy, however, if a soul acts impiously, acting according to his own whims, he has to suffer a bad karmic reaction, like poverty, disease, ugliness, pain, or some other undesirable circumstance.

In relation to such whimsical and barbaric activities like bullfighting, the law of karma insures that those who cause such violence and suffering to other living beings must themselves experience equivalent violence and suffering – immediately or in the future. The Bible explains, “As you sow, so shall you reap.”

The Law of Karma

When a human unnecessarily takes the life of another entity, especially under conditions of great pain and suffering, this act of overt aggression produces a severe karmic reaction as shown in the pictures above. And, if year after year millions of animals are mercilessly butchered in huge, mechanised slaughterhouses, the accumulated negative karma produced by all those participating is almost unfathomable. Not only is there individual karma, but family, community and country karma as well.

The history of the world has shown that nations that have displayed a total neglect of the health and welfare of their citizenry and exploited innocent animals, collapse into ruin.

“In this age, the propensity for mercy is almost nil. Consequently, there is always fighting and wars between men and nations. Men do not understand that because they unrestrictedly kill so many animals, they must also be slaughtered like animals in big wars. This is very much evident in the Western countries. In the West, slaughterhouses are maintained without restriction, and, therefore, every fifth or tenth year there is a big war in which countless people are slaughtered even more cruelly than the animals. Sometimes during a war, soldiers keep their enemies in concentration camps and kill them in very cruel ways. These are reactions brought about by unrestricted animal-killing in the slaughterhouse and by hunters in the forest.”

Bullfighting, much like other killing sports, is irrefutable evidence of the depths of depravity humanity has fallen to. We are a very sick species and are acting more like a deadly virus on this planet, killing everything in our wake. It is time for those that care — the real human beings — to speak up and stop all this madness before it is too late.

Read the facts on bullfighting at http://www.stopbullfighting.org.uk/facts.htm

When our Masculinity fails us — what do we do?