posted by: Paul Rodney Turner
Fairfax, Virginia USA
A eulogy to my father, Rodney John Turner, on the occasion of his funeral, May 15, 2001 (first time published)
My dear family and friends,
First I would sincerely like to thank you all for coming today to pay your last respects to my father, Rodney Turner.
It is with great regret that I cannot be here today with you.[1] However, please know that I am most certainly here in spirit.
It seems only yesterday that I was in Australia, for what I thought would be the last few days of my father’s life. Along with my mother, we spent many sleepless nights nursing him and consoling him in his apartment, trying to make his stay at home as confortable as we could. Even though it was not to be his last days then, I knew in my heart that it would be the last time that I would see him[2].
With this in mind, I did whatever I could to reconcile any ill feelings I had harbored in the past and genuinely tried to heal and nurture his and my own spirituality. Today, I urge you all to do the same.
Many of you are aware that for 14 years I lived the life of a celibate monk. During those years I was able to do a lot of personal healing and soul searching. That experience helped me to grow into a strong and balanced person that I am sure my father is very proud of today.
Throughout those years I lived in an ashram with few personal belongings, and for the most part separated myself from life’s luxuries. However, I always remembered the things that my father taught me; the examples of determination he showed in always trying to win, his unflinching love for my mother, his “down-to-earth” approach to life’s challenges, and his comedic wit. All of them stayed very close to my heart.
Another characteristic that stood out and which exemplified his life as a “battler” was his oft statement, “You’ve gotta gave a go, mate.” Although simple in nature, the purport, to me at least, was very profound and had a tremendous impact on my life. You can imagine, that as my father, he taught me many things, but this almost silly statement just seemed to stick with me.
I found it to be consistent with the newfound philosophy on life I garnered from my experience as a monk. After all, I mused, “we are all equal in the eyes of God, so why not try to be the best I can?” The only thing holding us back are the limitations we place upon ourselves, and certainly not any partiality on God’s part. With this in mind, I now go about life with an incredibly positive attitude, knowing that, by God’s grace, I can achieve anything I set my sights on!
Ironically, however, my beloved father got just a few too many ‘kicks’ from life and began losing faith. He looked for sanctuary in alcohol and of course never found it. Fortunately, however, he never completely lost his faith, and although he rarely showed it, he was a deeply spiritual man. Looking back, I believe that the tough experiences he had in life, beginning with leaving home at the age of 14 to become a jockey, compelled him to build an emotional fortress around the real person few of us rarely witnessed.
So who was Rodney Turner really? Was he that young handsome jockey that swept my mother of her feet? Was he that barman at the club, loving father of four children, and pool hustler? Was he that “phantom-like” club member who always seemed to have money and yet be out of work? Or was he just a cranky old man that in the end didn’t know what was good for him?
I dare say that he was all of them, but at the same time, none of them! After all, the eternal identity of Rodney Turner, my father, your brother, friend or husband, is that of a servant of God and not flesh and bones. In other words, a spirit soul that never dies, but lives on eternally beyond the limitations of a physical and temporary mortal frame.
I love my father, but in truth, I loved the person – the soul that played the role of my father in this life. That experience can never be taken away. It is these special insights and loving memories that live on past the grave – that help us mature spiritually into better sons and daughters of God.
The world is most certainly a “stage” – a place where we play our roles and learn from the experience, and in the end prepares us to return to where we once came from – the Kingdom of God.
Despite his failings (and don’t we all have them?), I believe very strongly that my dad is on his way to that Kingdom. For in his very last minutes, he was blessed to hear the holy name of God uttered in his ear by his loving daughter Julianne. What makes me so sure of this? Simply because all the world’s great spiritual traditions absolutely agree on this one philosophical truth: God is present in his holy name! And the holy names of God are unlimited, Christ, Christos, Allah, Yahweh, Jay and Krishna are but a few. 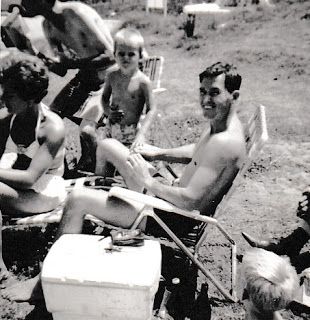 On days like this there is nothing wrong in being philosophical. If we deny this basic human need, we will continue to miss the very substance of life’s meaning.
Our time here in these present bodies is short to say the least. On a cosmic scale, we barely make an impression. That is why we must step back and see the bigger picture and ask, “Why?” It is this intelligent inquiry that elevates us above the animal kingdom and prepares us for true success. 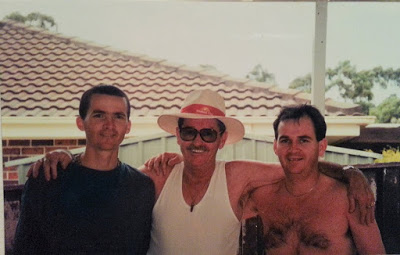 My father tended to “keep his cards close to his chest, “ but I remember having many philosophical talks with him. He did ask why, he believed in reincarnation and he did sincerely try to understand what life was all about. Hopefully now his questions have been answered.
One other very fond memory I have of my father and one that literally changed my life was his genuine hospitality and love of offering food to his guests. To this day, I vividly remember him laughing all the while preparing toasted sandwiches (waffles) loaded with red-hot Mexican chilies and then handing them to his innocent guests with a cheeky smile from ear-to-ear. The funny thing was that although their mouths were literally on fire, they devoured those sandwiches with great relish and with beads of perspiration rolling down their foreheads they thanked dad and asked for more. And he was more than happy to do it all over again. Some of you in the audience may still have the scars to prove it!
Taking a leaf from dad’s ‘cookbook on life,’ I too developed a love for cooking and serving food. In fact, it led me to become the director of the world’s largest vegetarian food relief (www.ffl.org). Having traveled to more than 50 countries, I have lived with and helped some of the most unfortunate people in the world, including visiting refugees in the war zones of Sukhumi and Grozny. It is by far the greatest experience of my life, and I cannot help but give credit to my father for planting that seed in my heart.
Finally, I want to mention that my father leaves behind the most beautiful wife and mother in the world – Alison Turner – a true blessing to us all.
I love you mum. I love you dad.
Thank you for everything.
Your youngest son,
Paul Turner, age 37
POSTSCRIPT
One powerful experience I had during my last few days with my father that was not shared in my eulogy was seeing him pray to God. He was dying from Emphysema and his lungs were extremely weak and shallow, requiring him to be on an oxygen machine for up to 18 hours a day. I sat beside my father and encouraged him to pray. I taught him the maha mantra, “Hare Krishna Hare Krishna Krishna Krishna Hare Hare, Hare Rama Hare Rama Rama Rama Hare Hare. I would chant one line at a time: “Hare Krishna” And with extreme difficulty and with the faintest of breaths he responded, “Haaaaareee Krishhhhhna” For him it was like lifting weights. He was in so much pain and could barely breath what to speak of talk. I patiently went through the entire mantra together. It was one of the proudest moments in my life to see my father praying to God with the utmost sincerity. In my heart, I knew God was hearing him and it was at that moment I felt confident that I had completed my duty as a son.
[1] My brothers and sister wanted to give dad a nice send-off and we were all to pay $1500 each for the funeral arrangements. One of my brothers was not able to, so I offered to pay his share and remained in the US. I reasoned that I had just flown to Australia to be with dad a few months before and had said my goodbyes and that it was not necessary to be there for the funeral. It was a hard decision to make. Now 12 years later, I wish I had been there, however, I do believe my presence was felt on that day by everyone.
At the time of the reading my eulogy by the priest (Father Paul), I sat in front of my alter in Virginia, USA and read it aloud all the while picturing myself in front of the assembly of family and friends. I later heard that my offering was deeply felt by everyone, especially the priest who read it on my behalf.
[2] I was deeply moved by my father’s efforts to chant the holy name and privately cried often during that time I was with him.
FOR MEN, PERSONAL, SPIRITUAL